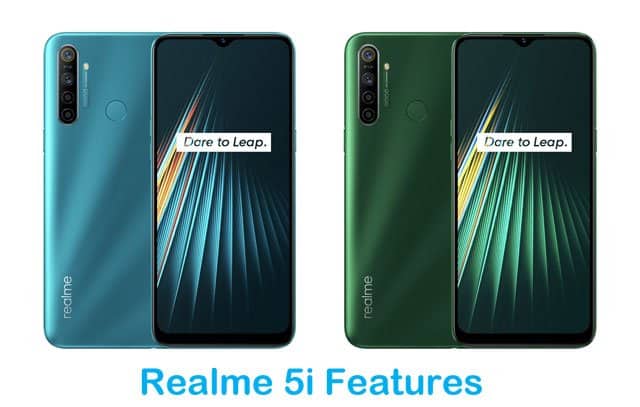 Realme 5i Features: Realme 5i has launched on January 09, 2020, in India. So here in this post, we are going to discuss realme 5i features in detail. Realme 5i is quite similar to realme 5. It is the lower version of Realme 5.

Realme 5i has a similar back design to Realme 5 but its colour variants are different. It sports a full-screen display with in-display two selfie cameras.

Realme 5i sports 08MP single selfie camera. It also sports 12MP Quad rear camera support. Realme 5i has some unique features which we will discuss in this post below.

Realme 5i sports Qualcomm Snapdragon 665 SoC. Snapdragon 665 AIE is based on 11 nm process technology. Its maximum CPU clock speed is 2.0 GHz. It is an Octa-core processor. It is having Kyro 260 AIE CPU and Adreno 610 AIE GPU. Snapdragon 665 is the mid-range processor by Qualcomm.

It is having 08MP ultra-wide lens that can take 119-degree view photos which are 1.5X larger than a normal camera.

Realme 5i sports 6.5 inches HD+ LCD mini drop fullscreen display with 1600×720 pixels resolution. It has an 89% screen to body ratio. Realme 5i is protected with Corning Gorilla Glass 5 at the front and rear side.

Realme 5i is powered with a 5000mAh battery. And it sports micro USB charging port. It doesn’t sport fast charging.

Realme claims that realme 5i has a 30 days standby battery backup. Once you charge realme 5i 100% then it will long last for 2-3 days on normal usage.

Realme 5i also sports reverse charging. You can use realme 5i as a power bank to charge other smartphones or other electronic devices.

Realme 5i launch date in India

Realme 5i Price in India

Realme 5i is available in only one storage variant. It has 4GB RAM and 64GB internal memory which costs 8,999 Indian rupees.