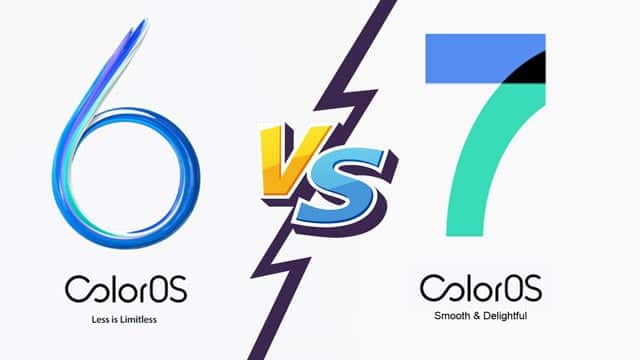 As we all know that ColorOS 7.0 is a big upgrade over its previous version ColorOS 6.0. ColorOS 7 update brings many new features and optimized User Interface.

ColorOS 6 is based on the Android 9 (Pie) operating system.

ColorOS 7 is based on the Android 10 operating system.

'Smoother than ever' is more than just a slogan.
By switching between multiple apps, this ColorOS 6 vs. ColorOS 7 speed test will show you how smoother we've become. #ColorOS7 pic.twitter.com/MLXf8vo17p

ColorOS 7 is 25% faster than ColorOS 6 in overall performance. ColorOS 7 update brings 40% RAM boost, 30% boost in system fluidity, 19% boost in FPS in gaming experience and a 15% boost in touch response. All these improvements make this upgrade very important.

Seriously, #ColorOS7 is so smooth that our eyes can barely catch up. So we've slowed it down for you to see for yourself! pic.twitter.com/1RTYPbebmW

There are two ways to start an app.
1. Cold start – launch an app for the first time
2. Warm start – reopen an app
Check out this video and tell us what you find! #ColorOS7 pic.twitter.com/xsyHUmIw02

Most of the apps are optimized in the ColorOS 7 update. Look and design of most of the apps have changed. Apps interface is made simple and feature-rich. Example of a few apps are as follows:

The clock app interface is redesigned. City clock shape has changed from rectangular to the circular shape.

Smart search support has been added in ColorOS 7. For example, you can search Color from contacts by typing 267 on your dial-pad.

Weather App in ColorOS 7 has different scenes for different types of weather. You can see the live scene in the update weather app. For Example, you can see live rain in weather app if there is raining outside.

The recent app has slightly changed in the ColorOS 7 update. You can find Clear option in ColorOS 7 recent apps whereas there is a cross icon for Close all apps shortcut.

ColorOS 7 is launched with an improved version of digital wellbeing.

OPPO ColorOS7 Launch
OPPO is the first smart phone company to use Digilocker platform as an authorized partner. DocVault is an easy, quick and smart way of managing documents on the go. pic.twitter.com/4NSZDmAqfT

Three-finger screenshot has a new feature, you can edit screenshot during capturing. You can save the desired portion of your screen with the screenshot. For more info please watch the video given below:

OPPO ColorOS7 Launch
The three-finger screenshot gesture is one of OPPO’s unique interactions since 2014. How to do it? Long-press with three fingers, select the screenshot area that you want. Done! Easy, right?!🙌#OPPOColorOS7 #ColorOS7Launch pic.twitter.com/qmdILMMGdy

ColorOS 7 has added a feature to connect to two Wi-Fi simultaneously. If you have two Wi-Fi available nearby your and don’t know which is fast or slow, or both of the wifi are slow then you can connect to both of that wifi at the same time and increase the overall speed.

Can’t wait to use Dual Wi-Fi? It gets activated under any of the two situations!
1. When #ColorOS detects a drop in internet speed to 200KB/s or lower, or a poor Wi-Fi connection;
2. When the primary Wi-Fi runs at a download speed of 2MB/s or lower.#OPPO #ColorOSfeatures pic.twitter.com/JYGqx80KN2

List of oppo and realme devices which will get ColorOS 7 upgrade are as follows: