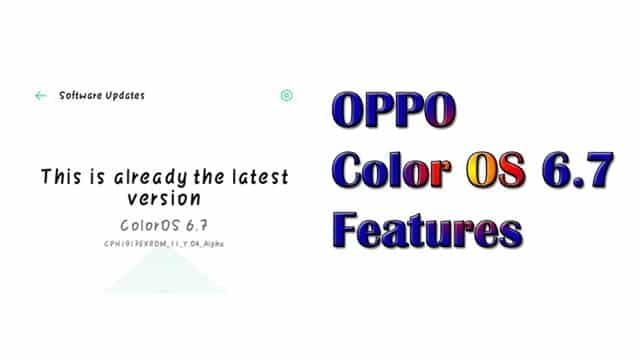 So here in this post, we are going to discuss oppo Color OS 6.7 new features and launch date in India.

All features in Video

Oppo User Interface Color OS is improving with every update. After the ColorOS update to version Color OS 5 people started enjoying it because of its simple user interface.

As we all know that ColorOS is nothing but a User Interface over Stock Android by Google. So the peculiarity of Color OS is a good user experience and simple user interface.

So the oppo devices will get Android 10 features with ColorOS 6.7 Update. Click Here to check Android Q (10) new features.

Notification Center: Notification center design has completely changed in this update. Settings icon shortcut are smaller in the latest update.

Volume Bar: Volume bar design is also changed in this update. When you press volume rocker buttons on your handset then you can see the design changes in volume bar.

Smart sidebar: Smart sidebar design is changed in ColorOS 6.7 update. You will now only see one row containing apps icons.

Floating Window: You can now open apps in floating mode over other apps. And you can also open many apps at the same time as windows.

Camera App: Built-in camera app got a new design in this update. It provides a different user interface.

Recent tasks: Recent task design is slightly changed in this update. You can now see clear now option below the apps in recent tasks.

A live caption is a feature when enabled shows you caption media playing on your phone screen.

Android 10 feature smart reply can reply on behalf of you to your messages and more.

This feature can work with every app in your mobile, you just need to plug-in your headphone in your headset to use this feature.

With ColorOS 7.0 update powered with Android 10, you’re in control of your privacy.

This is the amazing feature provided by Android Q (10). Now you need not worry about security patches updates for your smartphone.

The digital wellbeing feature record your all activities on your smartphone and can show you all details when you ask to show.

ColorOS 6.7 Beta version based on Android 10 has already been released for Oppo Reno series devices. You can CLICK HERE to download the latest version of ColorOS Based on Android 10 for oppo reno devices only.

However, the final launch date for the ColorOS 6.7 update based on Android 10 is still not confirmed. But we can expect it this for few Oppo devices.

We hope that you liked this article and found useful to you. If you have any question and feedback then let us know in the comment box below.