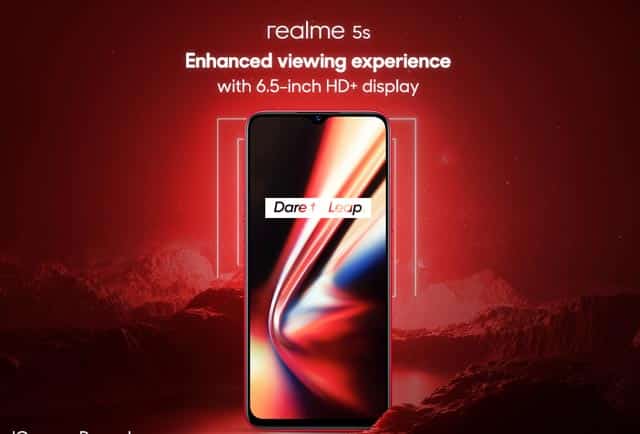 Here we will discuss realme 5s specification and launch date in India. All features of realme 5s are confirmed by realme on its social media platforms. So let us discuss all of these one by one.

We have a ‘powerful’ surprise for you. Have you heard about the 48MP Quad Camera Powerhouse? Gear up to meet the all new #realme5s!
Launching at 12:30 PM, 20th November on https://t.co/reDVoAlOE1.
Know more: https://t.co/Eu9m2khUyE pic.twitter.com/lwQlK5tmgU

Realme 5s is powered with 5000mAh big battery. It’s just not a battery, it’s a super powerhouse. So battery backup in Realme 5s is going to be amazing. Realme 5s will also have fast charging support.

With a massive 5000mAh battery, #realme5s is the most reliable choice for your daily usage and to enjoy the longest hours of gaming, streaming and music playback.
Launching at 12:30 PM, 20th Nov on https://t.co/reDVoAlOE1. #48MPQuadCameraPowerhouse https://t.co/3oHbn6ElyA pic.twitter.com/6WVBP8TfkN

Realme 5s will be available in three colour variants.

Realme 5s price is not officially confirmed. We will update the final price after the launch of realme 5s on 20 Nov 2019 at 12:30 PM. The aspected price for realme 5s is as follows:

It’s time to flaunt the colours you love and follow the trends, we are happy to present the new Red colour of #realme5s.
Witness the launch of this #48MPQuadCameraPowerhouse at 12:30 PM, 20th November on https://t.co/reDVoAlOE1.
Know more: https://t.co/3oHbn6ElyA pic.twitter.com/7JiVxPj1jn

We hope that you like this article and found helpful to you. If you have any question or feedback then let us know in the comment section below. We will be happy to reply to your queries. And your feedback is always helpful to us.

Realme 5s is going to be a value for money mid-range budget smartphone for travellers. Because of its long-lasting battery life and powerfull 48MP Quad rear camera setup that can capture amazing enjoyable moments of your life.