Skip to content
Why Realme Became Popular Brand So Fast
Why Realme Become Popular Brand so Fast : Just a little time has passed  away when Realme launched its first device named as Realme 1. Realme’s first smartphone Realme 1 was launched in May 2018 and In Q1 of 2019 Realme has become 04th largest Smartphone Brand in India.
There are various factors behind it that made Realme a popular smartphone brand in India and now Realme is expanding its sale all over the world. In this post we are going to discuss all the factors behind popularity of Realme smartphone brand. 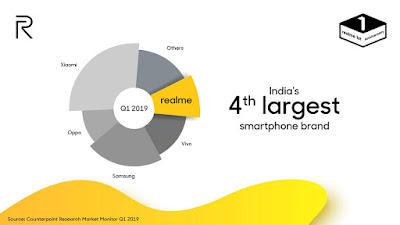 Realme is a sub-brand from Oppo Electronics Chinese company. When Realme’s first smartphone Realme 1 was launched in May 2018 there was a branding of Oppo on backside. That was a trail that people will love it or not and when Oppo has felt that Realme new brand is working and people are loving it then they have decided to make Realme as a separate brand.
Oppo launches its majority of phone with a price range 15K and above and this strategy of Oppo was working but Oppo wanted to increase its user and tried to extend its smartphone price range and made a new brand as Realme.
Realme always provide its mid range or below smartphones at reasonable price.

Realme has not wasted its money on any Brand ambassador or on advertisement in its early stage. Realme has made a different strategy for its smartphone to reach to a large number of people.
Realme has approched to some of the famous Tech YouTuber’s like Technical Guruji, Greeky Ranjit, Sharmaji Technical and so on. These type of famous youtubers are having a large number of viewers or followers.
Realme launched its Realme 1 at a very low price no any single brand was providing Mediatek Helio P60 with face unlock and 6.3 inches Full HD + display at 8,999 price. So these famous youtubers praised Realme 1 and appealed to their followers / viewers to purchase Realme 1.
There after Realme launched Realme 2 it was not a successor of Realme 1 but some of the major week points were fixed like availability of Fingerprint sensor in Realme 2 etc. And Realme 2 was a first smartphone with notch above in its price range. So people loved it and purchased Realme 2.
So the popularity of Realme become so fast with the help of YouTuber’s.

The main and top Reason behind the popularity of Realme is its price. There are two  aspects of price for Realme smartphones those made Realme so popular.
1. Realme all smartphone are worth buying devices or You can say that Realme launches its mobile phones at very reasonable price without compromising features and specification of phone.
2. Realme all mobile phones are mid range mobile and there is a majority of people in India that purchase mide range of low range mobiles. Most of the people in India purchase mobile within price range of 7K to 18K and Realme was knowing it very well. So Realme launched its all smartphones in this price range.
One day Realme CEO Madhav Seth itself told that we only keep 03 percentage of margin on any smartphone thatswhy our products are so cheap and feature rich.

In the past one year Realme has still not invented its single new technology and become 4th largest smartphone brand in India. This is possible because of Oppo. Realme is using all of its hardware and Software from Oppo.
Realme all devices are working on ColorOS which is the property of Oppo. So Realme has not spent its money on Research and Development also. Realme has saved all of its money from every where like need not to create its own OS, Advertisement, Brand Ambassador, Hardware technology etc.

Realme Works on Feedback from Users

Realme has made various change in there software and hardware as well after taking feedback from their valuable users. Realme says Realme users are their brand ambassador.
Realme is very much active on its social media platforms like Facebook, Twitter, Realme Community, YouTube etc. Realme CEO Madhav Seth told in its one of the QNA video that he personally read all the comments in the Videos related to Realme smartphones and tries to understand what Realme users want from them.

Hey Guys, I think you like the post and after reading this post came to know that why Realme became popular brand so fast. If you have any suggestion or question related to Realme or Technical Puruji Website / Blog to improve , lets know in comment box. Your feedback is always appreciated and very useful to us because Technical Puruji is your own Blog. So feel free to ask and suggest us.